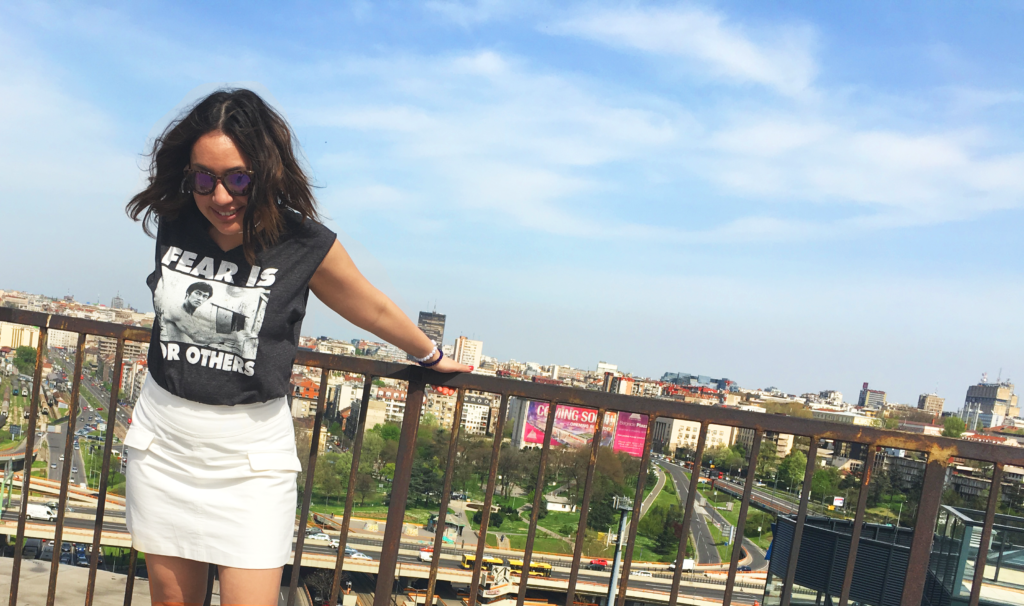 “He reminds himself it’s better to be in the arena, getting stomped by the bull, than to be up in the stands or out in the parking lot.” -Steven Pressfield, The War of Art

The first two weeks before launching my blog I was riding high on a wave of excitement and motivation.

One week after launching I entered the boxing ring with my inner self-sabotaging demons.

After I wrote my second post “Emotions from Paris Fashion Week”, I began to hear a faint voice of doubt inside. I ignored the doubt and continued writing. After writing my fifth post I became insecure about every single thing that I was doing and I was questioning why I even started a blog in the first place.

I was in a pit of hopelessness with zero motivation.

Eventually I found my way back and that included changing directions from chicapam.com to pamelagiacometti.com. I re-confirmed my focus to share stories that would bring light to the souls of those within my world. This new awakening brought peace to myself and I could feel myself going upwards.

No sooner did I begin to feel the rise when the crash of feeling like a “fraud” hit me. My mind became clouded with: “I’m no writer! Who do I think I am wasting peoples time reading my posts?” and “what I am even doing giving advice to others?”

I will call this resistance my personal “fight or flight” phase – and all I wanted to choose was flight. I wanted to “flight” far, far away and forget everything. I wanted to quit.

I’ve never been much of a YouTube watcher, but during my time of wanting to quit I turned to YouTube for support. Watching so many people passionately work for their dreams every day reminds me just how lucky we are to have so many opportunities.

After a couple of YouTube watching days it was clear that I couldn’t keep running away from myself and hiding behind other people’s stories. I knew it was time to start taking responsibility for any future successes I wanted.

It was probably the YouTube binge watching that pushed me to create my own YouTube channel. While I love writing, I love talking more. It’s also probably the inner 10-year-old Pamela making her dreams come true of being a talk show host (even if PamTV is only watched by 50 people. 😎 )

… And so I started making videos.

So far I have made 6 videos and today as I am writing this post, I am already beginning to feel the self-sabotage sneaking up on me. The feelings of “why are you even doing this?” are quickly replacing my joy of having gone beyond all insecurity to put myself out there.

No one told me it was going to be like this. No one told me that trusting myself and following my Pamela visions would invite a brutal boxing match with my self-sabotaging inner demons.

I find it hard to accept how fast we can self-sabotage ourselves into believing that fear and doubt deserve our respect and obedience – when they don’t.

Every day I get into the boxing ring to defend what brings purpose to my morning and night. I often ask myself: Why don’t I just stop and do something else?

But I know that’s not the real Pamela talking. I know that’s the self-sabotaging sneaky manipulator pretending to be my friend.  Self-sabotage can trick you into believing that you should quit or not even try what you want to try.

Self-sabotage like fear, resistance and every other noun that tries to stop us from creating our soul’s art should be kicked in the face and ignored.

In short my friends, I say to you: Don’t be afraid to do the work that will share your gifts with the world. Don’t let self-sabotage win.

No fear or rejection will ever match the happiness and respect you give to yourself when you believe in the powerful being that is you.

Thank you for reading and I wish you all a fabulous week! 🙂

Ps. If you missed the last episode of PamTV filmed during a Tuscan storm… You can watch it below. 🙂

4 Thoughts to “Self-Sabotage: The Sneaky Manipulator”